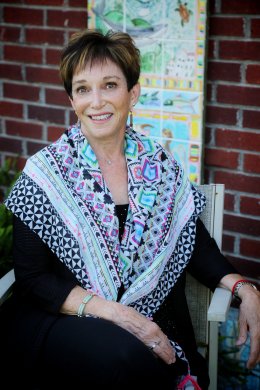 CAROLE GARRISON is a roamer. During the course of her life she has wandered around the world several times, worked and lived in SE Asia. In Europe, she relived Western history and her familial past. In Asia, she was intensely attracted aesthetically and spiritually to the region. Wherever she traveled, she connected to the people, to their culture, and to their dreams. Many of those connections have survived decades of time and distance.

Writing about her travels started as simple journals, ways to record make sense of her experiences. Not good with a camera, she used words to capture her journeys. As Carole developed an avid following for her roaming, her writings became more focused and polished until her adventures began to populate her blogs and books. And in time, she has taken hundreds of photos during her travels.

Carole never followed a simple career path. After college and a stint as a suburban house wife and mother in Miami Florida, she relocated to Georgia with her two young daughters, Debra and Samantha. There she joined the Atlanta Bureau of Police Services in the early 1970s as one of a handful of women police officers, but shifted to education after receiving her MPA from Georgia State University’s evening master’s program. During her career as an educator, she did research that highlighted the roles women play in police work, helped launch The University of Akron’s Women’s Studies Program, improved services to women in the city – and went off to Cambodia to help supervise that country’s first democratic election.

After earning a Ph.D. at Ohio State University, Carole taught Corrections, Criminal Justice and Public Administration at Kean College in New Jersey, hung out with the lifers who started the first Scared Straight program at Rahway State Prison, and did research on Juvenile Crime and Substance abuse. She came to Akron in 1981 to teach at the university’s Department of Criminal Justice. Her research was practical and usable – she studied drug/crime nexus among adolescents, community attitudes toward police women and the employment of female police officers in Ohio. As a result, she was one of only thirty criminal justice professionals asked to serve on the review committee of Ohio’s proposed police certification curriculum.

Shortly after arriving on the U of A campus, a small group of women – Carole among them – started planning a Women’s Studies program at the university. The plans took time; the small group not only had to come up with an academically sound proposal but they also needed to build alliances across campus. She became the program’s founding director.

While director, Carole expanded her ties to the community. She was one of the founders of the Women’s History Project of the Akron Area and served on the boards of the Rape Crisis Center, the National Women Studies Association, and was appointed by President Bush to the U.S. Defense Department’s Committee on Women in the Service, and then to the committee’s executive board by President Clinton. She was Associate Director of the Kent State/University of Akron Institute for the Study of Gender and Education; a member of the National Council for Research on Women; She was the first Co-Vice Chair of Ohio’s State Women’s Commission.  She served on the Research Advisory Board for the Ohio Department of Corrections, and the Summit County Domestic Violence Taskforce.

In 1992, Carole went off to Cambodia to supervise that country’s first democratic election in its history. For 13 months, she lived in remote village, set up polling stations and supervised the registration of voters. In 1993, she returned to Akron to teach; but three years later she was back in Cambodia as executive director of the Cooperation Committee for Cambodia, a network of humanitarian and developmental non-government organizations. While in Cambodia, Carole adopted 6-year-old daughter, Tevi Seng.

Today, Carole resides in Ona ,WV. Although retired as chair of the Department of Criminal Justice and Police Studies at Eastern Kentucky University, she continues to teach applied ethics and policing courses online. When not teaching or writing, Carole serves as an executive board member of the Friends of WV Public Broadcasting, Chair of the board of Unlimited Future, a local Huntington WV business incubator, a docent at the Huntington Museum of Art, and is a member of the Huntington Women’s Leadership Caucus. She is as an elected member of the Cabell County School Board and a reader for fourth grade at Altizer Elementary School.