A close friend chided me for writing an editorial in which I referred to the lack of diversity and inclusion of women of color at a recent unveiling of a weaving commemorating Sojourner Truth’s “And Ain’t I a Woman?” speech in Akron, Ohio.

Sojourner Truth may have been a woman of color but she was a black woman first, fighting against the oppression of blacks and for the emancipation of slaves—and oh, by the way—for the emancipation of all women. She didn’t use the term “women of color.” She probably didn’t know any Hispanic or Asian women. Nevertheless, I’m quite sure that, if she had, she would have included them under the general category of women—but not specifically with the same emphasis as she applied to black women.

My friend, who has been challenging me since she was my student in the late 1980s, argued that, by using the descriptor “brown,” I diluted the black struggle. I was basically lumping everyone into one large category, without shading or distinction. My friend isn’t insensitive to the struggles of all women, regardless of color identity, but from her perspective, using the term “women of color” lumped all struggles together as if each was the same and each could be rectified with identical responses. 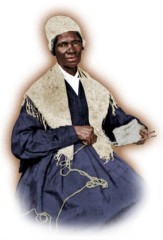 “Not true,” said my friend. “While we share some similarities in our struggles, our fights are inherently different. We can cooperate and join together to solve common problems, but black is not brown.”

It took me a while to wrap my head around her feelings but, in the end, I got it: brown and black are metaphors, not colors. Sojourner Truth was a black woman and, although all women have benefited from her courageous words, they were meant to empower black women. So when women gather to celebrate her life, not just any old woman of color will do to add inclusiveness. No, on such occasions, it is black women who need to be present.