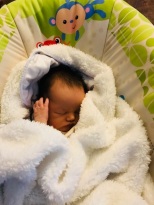 Tiny round fists poked up through the sweet-smelling new baby blanket as Declan stretched, curved his body, and turned his head before quickly nestling down again into the soft folds of his faux fur covers. Penetrating, almond-shaped, coal-black eyes opened and my grandson looked at me. I babbled some nonsense, holding his attention until, in a movement that reminded me of the baby robins in the nest under our deck, he began to open his rosebud mouth and root around for his mother’s breast. I looked over to my daughter, who was trying to catch up on her Facebook congratulatory messages. Tevi didn’t return my gaze and Declan, snug and quiet in my arms, closed his eyes and resumed the sleep of angels. I could hold him forever.

The quiet in the room was shattered as the door opened and a small girl with bright, black almond eyes bounced her way in and headed straight for me. “Cool, wow! My baby is here,” she announced. Liza, who turned three just two months ago, beamed as she looked at the tiny boy swaddled and sleeping in my care. “Liza,” called her mother. Liza turned, ran to the hospital bed, threw off her boots, and climbed up and into her mother’s waiting arms.
Within minutes, Liza’s attention turned back to her baby brother. She stretched her open hands and sang out, “My baby, bring baby.” I’m not sure anyone else could have moved me to give up the bundle in my keeping but, in that moment when I placed Declan in his sister’s waiting embrace, the world was perfect.