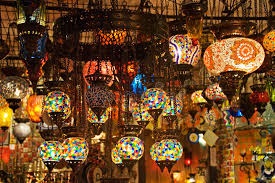 I arrived down the narrow cobblestone street to my severely turquoise hotel after a thirty-five minute ride through every alleyway, construction site, and shortcut from the airport in Istanbul, a city of seventeen million–everyone driving right then! Entering the Kybele (first goddess) Hotel was entering a different era—dozens of bright-colored glass lamps hung from every ceiling. The hotel was comprised of three townhouses attached together and filled to overflowing with antique furniture that sat helter-skelter on multi-patterned Turkish rugs.
The highlight of my 2014 trip was a reunion in Ankara a few days later with several of my graduate students from the Turkish federal police, who arranged for me to stay at the National Police Hotel. After they took me to Ataturk’s mausoleum and museum, we caught the changing of the guard and then stopped for some traditional food. At dusk we strolled the big center city park, rode trams and metros, and lounged late into the night on pillows and kilims while we chatted at a Turkish tea room.
A few years later, in August of 2016, a Turkish former student and her husband were slated to arrive in the US to begin a research fellowship and give birth to the couple’s twin daughters. Two days before their departure date, their passports were revoked after a failed coup attempt. I haven’t heard from them since receiving a photo, a month later, of my student cuddling a twin in each arm.
I was in e-mail contact with another student all through the night of the coup until the second day of its aftermath. I didn’t hear from him again until last July, after an eleven-month blackout. His passport voided and fired from his job, he lives under virtual house arrest awaiting the vagaries of Turkey’s judicial system. He has few, if any, contacts with former colleagues and scans the arrest lists for their names. His crime? Their crime? Each has a PhD from an American university.
Do you think the US is graduating terrorists? Are the tenets of democratic policing radical? Perhaps the current US administration thinks so. Read up on the oversight rollbacks by the Department of Justice, or dwell on the president’s quote in New York City to law enforcement officials: “Please don’t be too nice.”
My former students never thought democracy and secularism could topple in modern Turkey, but it did. Can it happen here?
Like this post? Follow me at cjgarrison.com